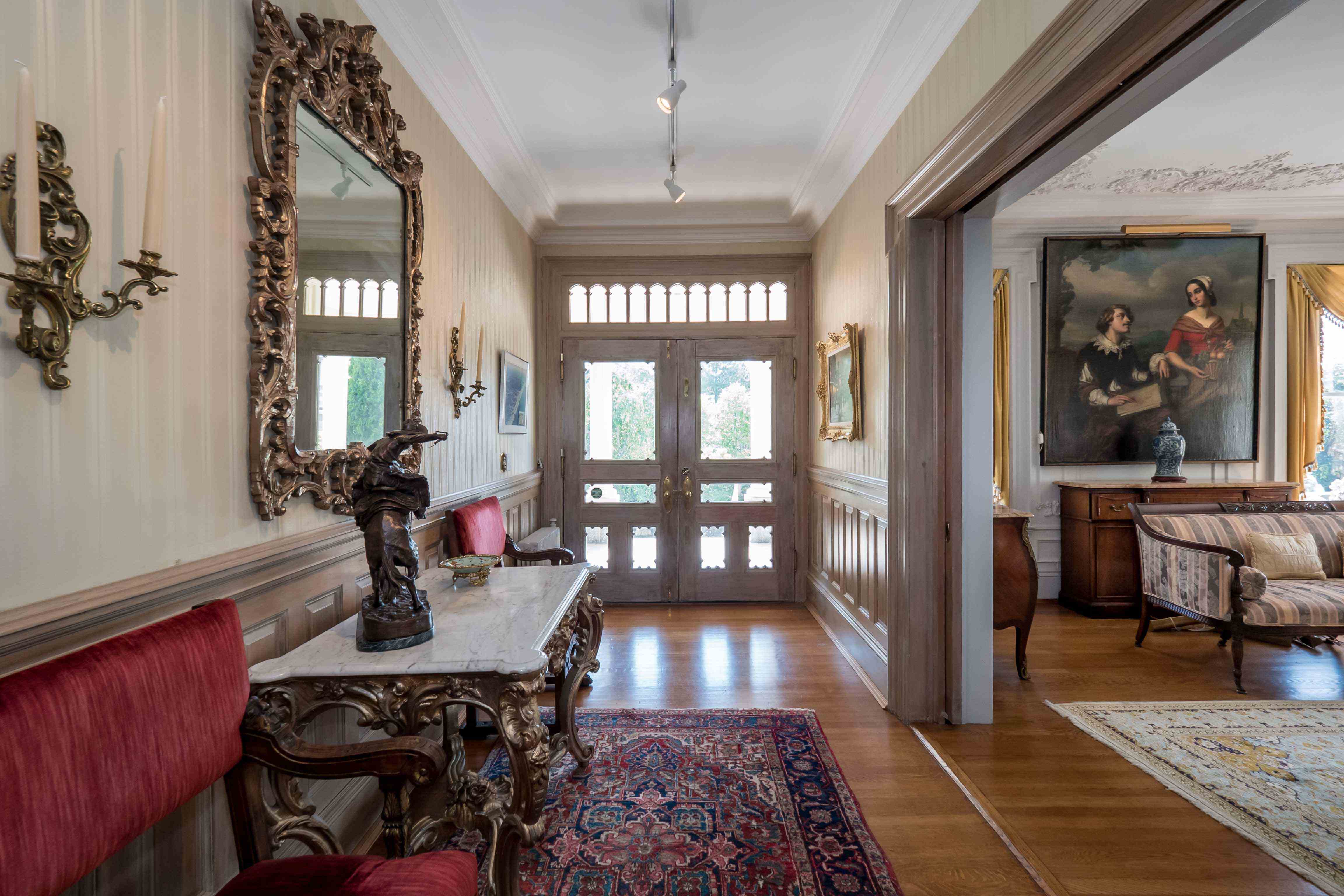 A bit of fate brought the Reidys to Greystone. An international businessman, Reidy and his family had been living in Singapore for more than a decade. But now with three boys and a desire to school them in the states, they began searching for a place to live. After failing to find anywhere they felt comfortable on the West Coast, they looked East. Juliette had no desire to live in snow and Frank did not want to live in the Deep South (he grew up in Philadelphia). An avid sailor, who’d been around water his entire life, Reidy liked the idea of being near the Chesapeake Bay. Flying across the Pacific in 1980, Frank saw Greystone in a book of homes for sale in the States. He looked it up on their next trip to America. Frank and Juliette Reidy bought the house in 1981 for $240,000. With numerous roof leaks, it was in poor condition at the time. 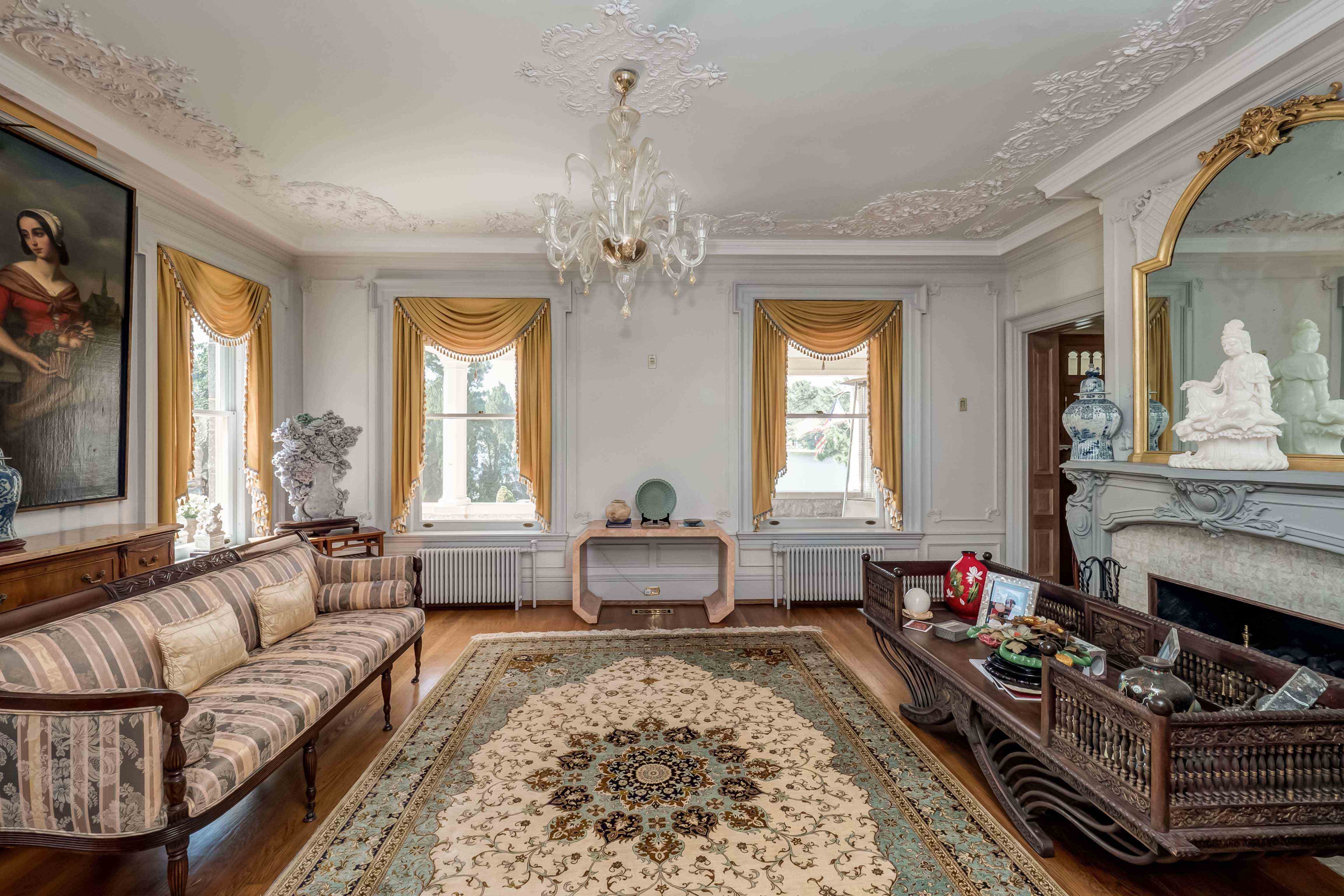 Reidy hired a caretaker/carpenter who lived in the house and began to fix it up, while he, Juliette and the boys remained in Singapore to shore up and sell off his various business interests. They would not return to live full time at the Greystone until 1986. During this period the repair of the roof was the first major project, followed by the kitchen renovation.

Back in the states for the first time in several decades, the late 80’s and early 90’s was a period of adjustment for the Reidy family. Frank would later joke that he was “out of work and unemployable.” While he and his long-time business partners looked to develop a natural gas and oil business in Pennsylvania, Frank helped launch the sale of Epilady in America. With cash flow going in the wrong direction, he and Juliette talked of different options for the Greystone. A corporate retreat. Or rental as a movie set. Home expenses without major projects or renovations were running about $30,000-$40,000 a year. Frank put it up for sale. 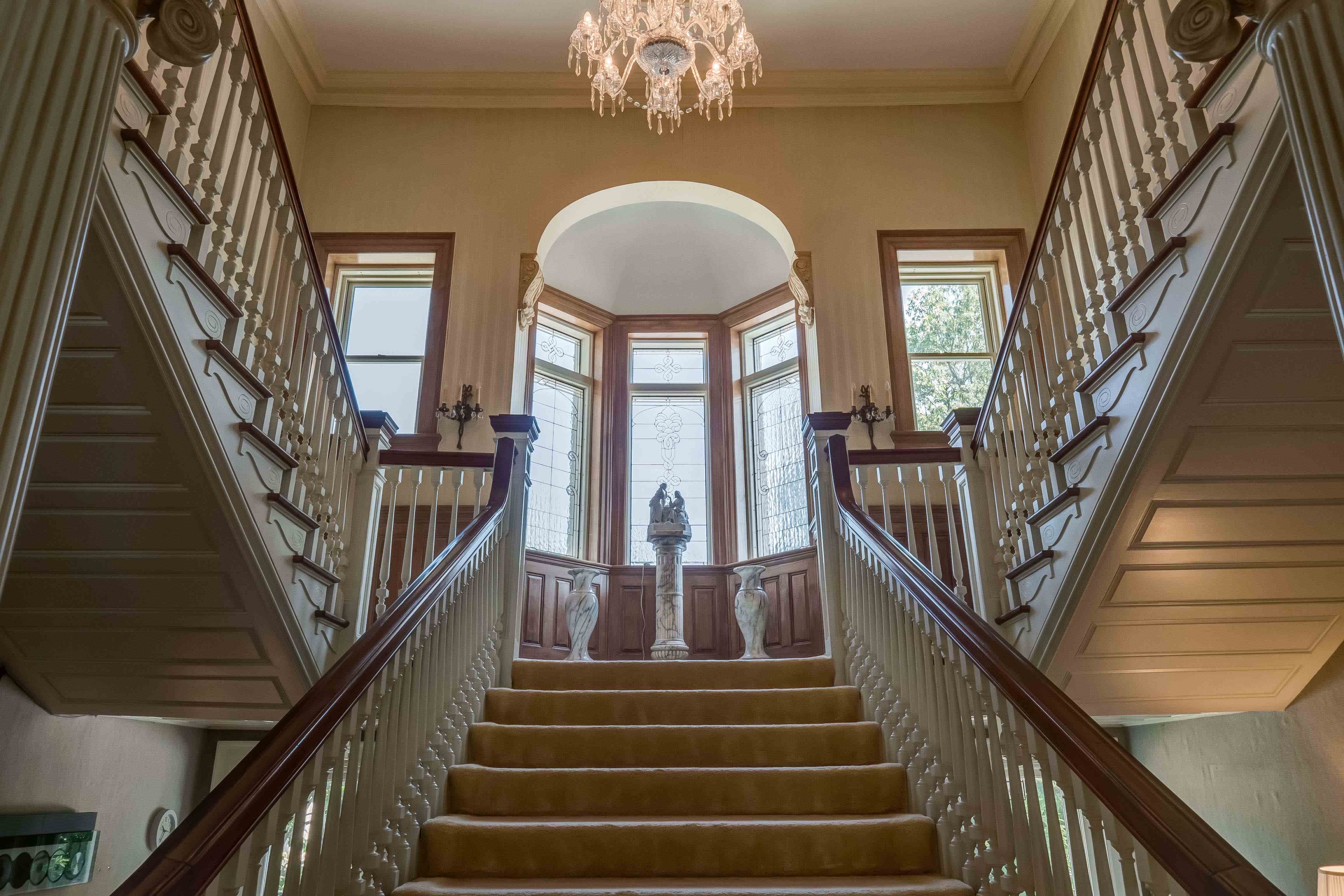 But in 1992-1993 the oil and natural gas business picked up, the Epilady project ran its course, and Reidy rejoined his partners. By the mid-1990s, the business had started to pay a decent income and Frank and Juliette began the process of renovations. She took a one-year landscape gardening course from George Washington University at the Norfolk Botanical Garden and he began hiring contractors. The heating and air conditioning systems were replaced. Bedrooms and bathrooms on the second floor were renovated and in some cases reconfigured. Next came the porches and roofs. Then extensive repairs to the columns and woodwork. Complete painting of the outside. A new roof. A redo of the entire electrical system. In 2000, a standby generator was installed.

It is here in this grand room, where one feels but may not notice an intrinsic feature of the Greystone: its windows and ceilings. Electricity and the modern amenities we now take for granted were but in their infancy at the turn of the 20th century and almost non-existent in the rural “no man’s land” of Virginia Beach. The large windows and high ceilings were designed to help with the heating and cooling of the house. In the summer, you would open the windows at the top and the bottom and the cool breeze would come in from the bottom and circulate the warm air out the top. 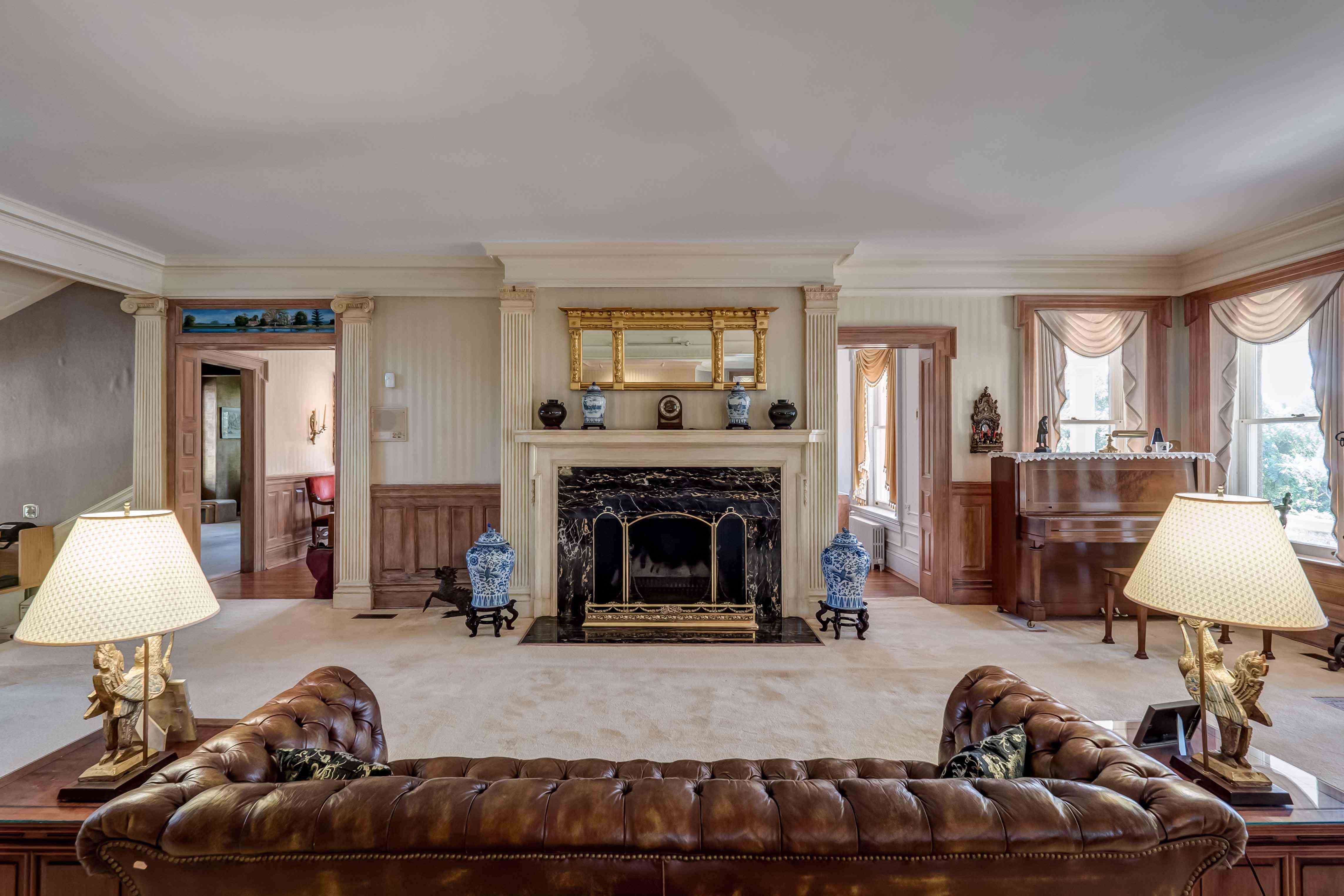 “This is one of my favorite features of the Greystone,” says Reidy. “The high ceilings give a sense of spaciousness not found in modern homes. Most houses today are built for the convenience of the builder not the consumer, so you end up with houses with tiny bedrooms and the like. But this house was designed by an architect and it has a spaciousness and graciousness that you can not find in today’s buildings. It’s that elbow room… that beautiful spaciousness that makes the house so great. All the windows that face south are twice as big as the windows that face north and west, and during the day they pick up the light off Crystal Lake, and that reflected sunlight comes off like sparkling crystals on all the ceilings. So every afternoon from about 1:30 or 2 o’clock on, the whole house lights up like candlelight, all from reflected light coming off Crystal Lake. I’ve never seen anything like that. But the architect thought of it and planned for it and it makes all the rooms that face the water quite heavenly in the late afternoons.” 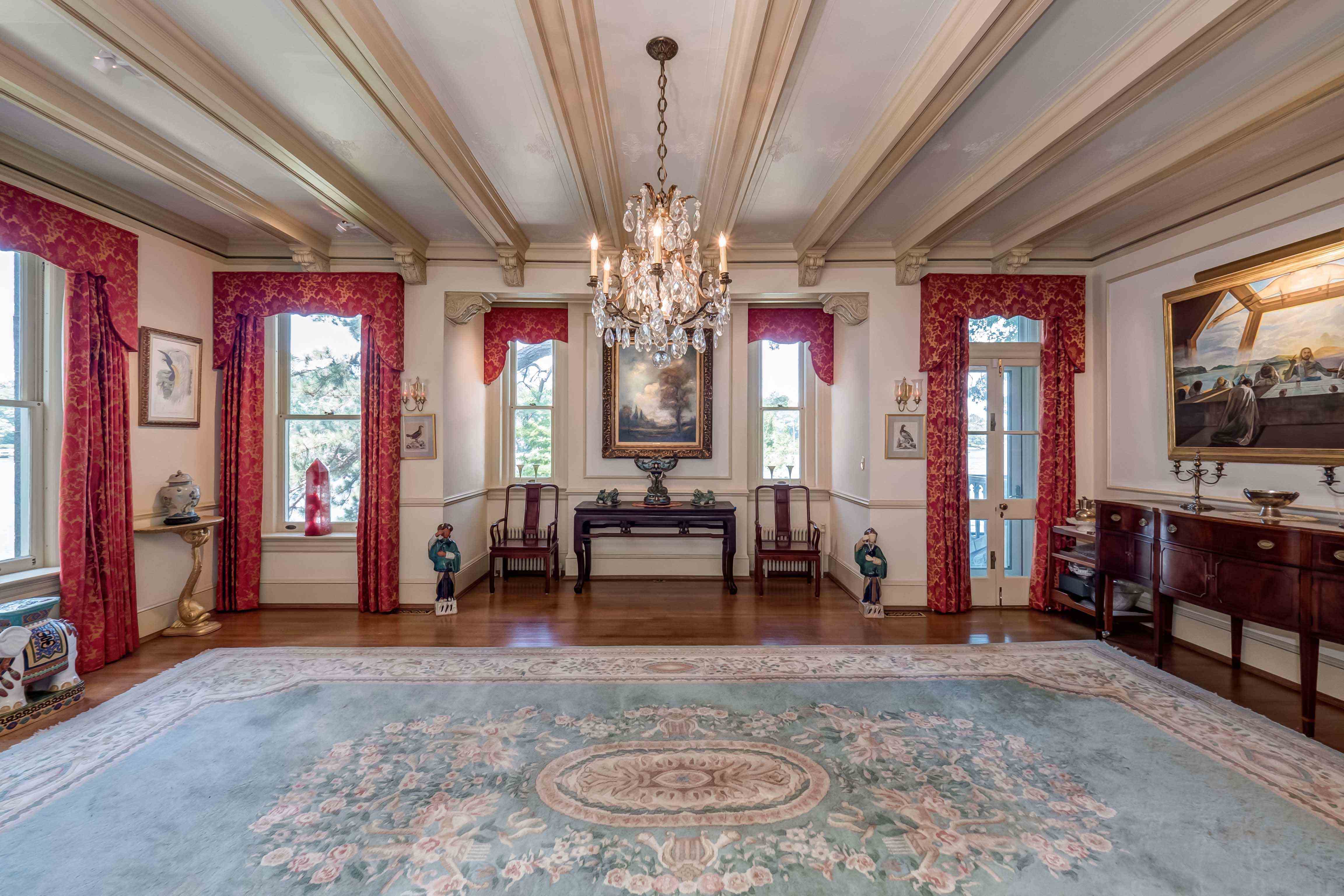 Everything he says is true. Nearly. It is said that Eberhard, the architect you remember, calculated the exact height of the house above the water to perfectly pitch this reflected light through the windows of the house. We do know the lot was raised several feet with hard clay before construction. So whether he really planned it perfectly, or just had a great day, the effect is still the same. Stunning. Exactly as stated. Sparkling crystals on all the ceilings…light up like candlelight. How could one walk away from the feeling in standing in those rooms? To say again: quite heavenly in the late afternoons.

So the Reidys stayed. Survived the Greystone. And in a sense, reached a truce. They settled in for the long haul, agreeing to the slow campaign of restoring this grand house to its original elegance. In the new millennium, the Greystone is in better shape than when the Masury’s first walked through the door. With an overwhelming and unprecedented effort to maintain the original design integrity of the house, the Reidys have turned Greystone into a modern classic. All the amenities of a 21st-century home, dressed in the grandeur of this turn-of-the-century mansion.