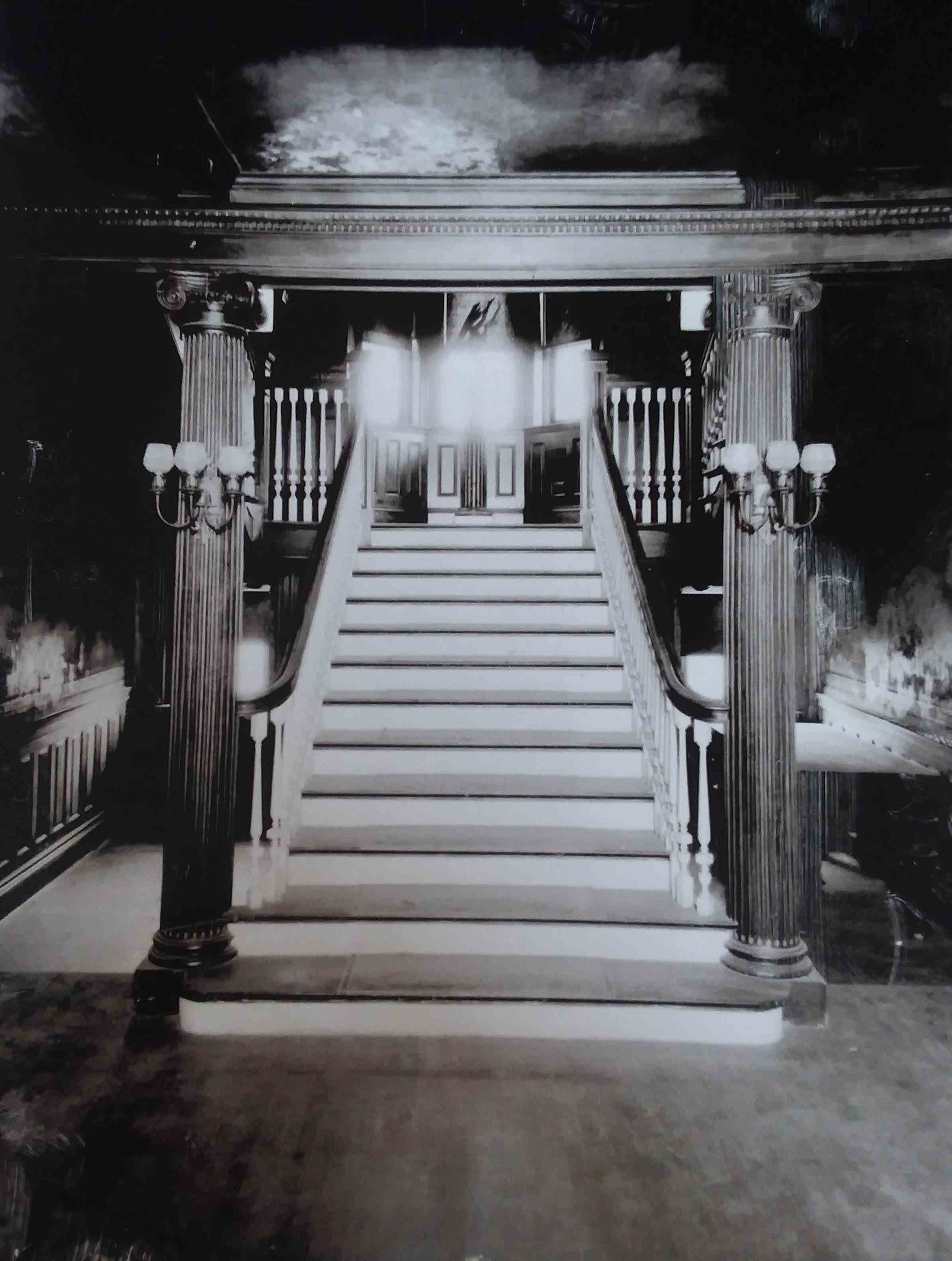 From day one, Greystone was certainly a grand and significant home by any stretch of imagination. Completed in 1906, the house was built by Dr. John Miller-Masury and his wife Martha Miller on a point of land on Crystal Lake in Virginia Beach. Designed in the Scottish Baronial style by Norfolk architect Arnold Eberhard, the house took two years to build and was the first full-time residence north of the Cavalier Hotel. At nearly 12,000 square feet, the house was constructed of blue Vermont granite and green Pennsylvania slate. Its style, material and size were all unique to this period and location. There are seven fireplaces, ornate plaster ceilings, wooden framework of Douglas fir, Southern Live oak floors, and Brazilian mahogany paneling. Each room enjoys a view of the water.

It’s unclear what originally brought Masury to Virginia Beach, but he bought the property for $21,000 in 1905 from Susan Uber, later adding several lots and a railroad right-of-way. The property, approximately 130 acres, ran from the ocean at 58th Street back west to Crystal Lake, south along the lake, then back east from 52nd Street to the ocean. Although plotted for 241 lots, the property hardly resembled the resort Virginia Beach is today. It was considered deep wilderness at the turn of the century. There were certainly no other houses like Greystone in Southeastern Virginia. The scale of the building, the novelty of its materials and its remote location led to great public interest at the time. Upon its completion, the Virginian Pilot wrote extensively of the house and its owner, placing Masury’s worth at $7 million and the total cost of the house, the land and the outbuildings at $240,000. 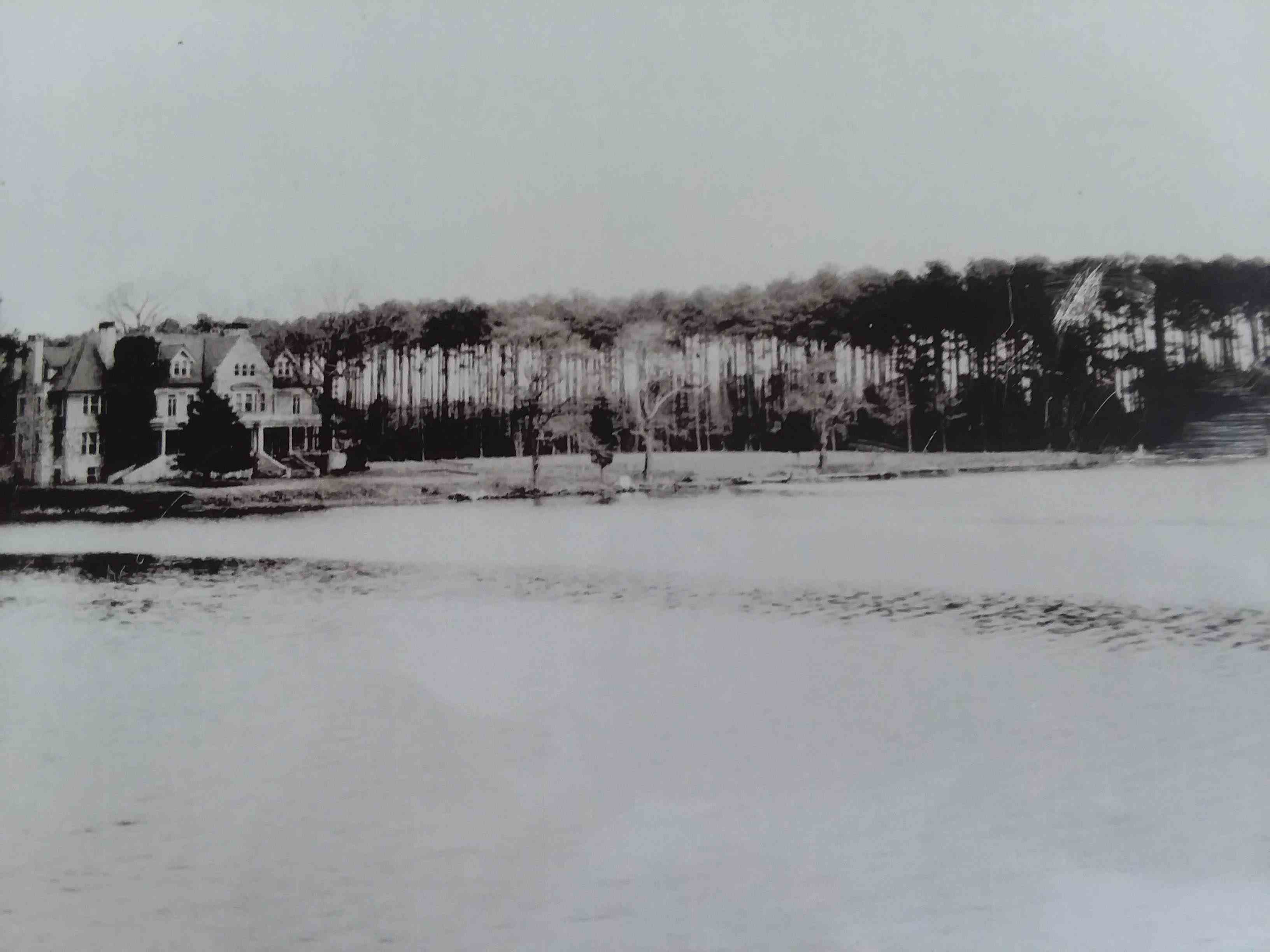 Dr. John Masury, heir to the Masury Paint fortune, received a medical degree from Columbia University but never practiced medicine. It was rumored that he had become addicted to morphine during school and decided not to practice. It is known that he did not need to work and devoted his life to travel and his sailing passion. Masury developed an early love of the water and sailing at his family home in Long Island. Many of his family were involved in the America’s Cup races, so it’s probable he would have sailed with that crowd. By the age of 26, he had a Master Mariner’s License, which meant he could sail any ship anywhere in the world. When he came to Virginia at the turn of the century, he brought with him a 180-ft motor sail yacht called the Carma.

Stories abound about how Masury, who married his widowed second cousin Martha Miller, would come down to breakfast and announce that in two days the family was leaving for England. The house would be packed up, and everyone would head to Norfolk to catch the boat. Masury would take the helm and sail the Carma across the Atlantic to England. 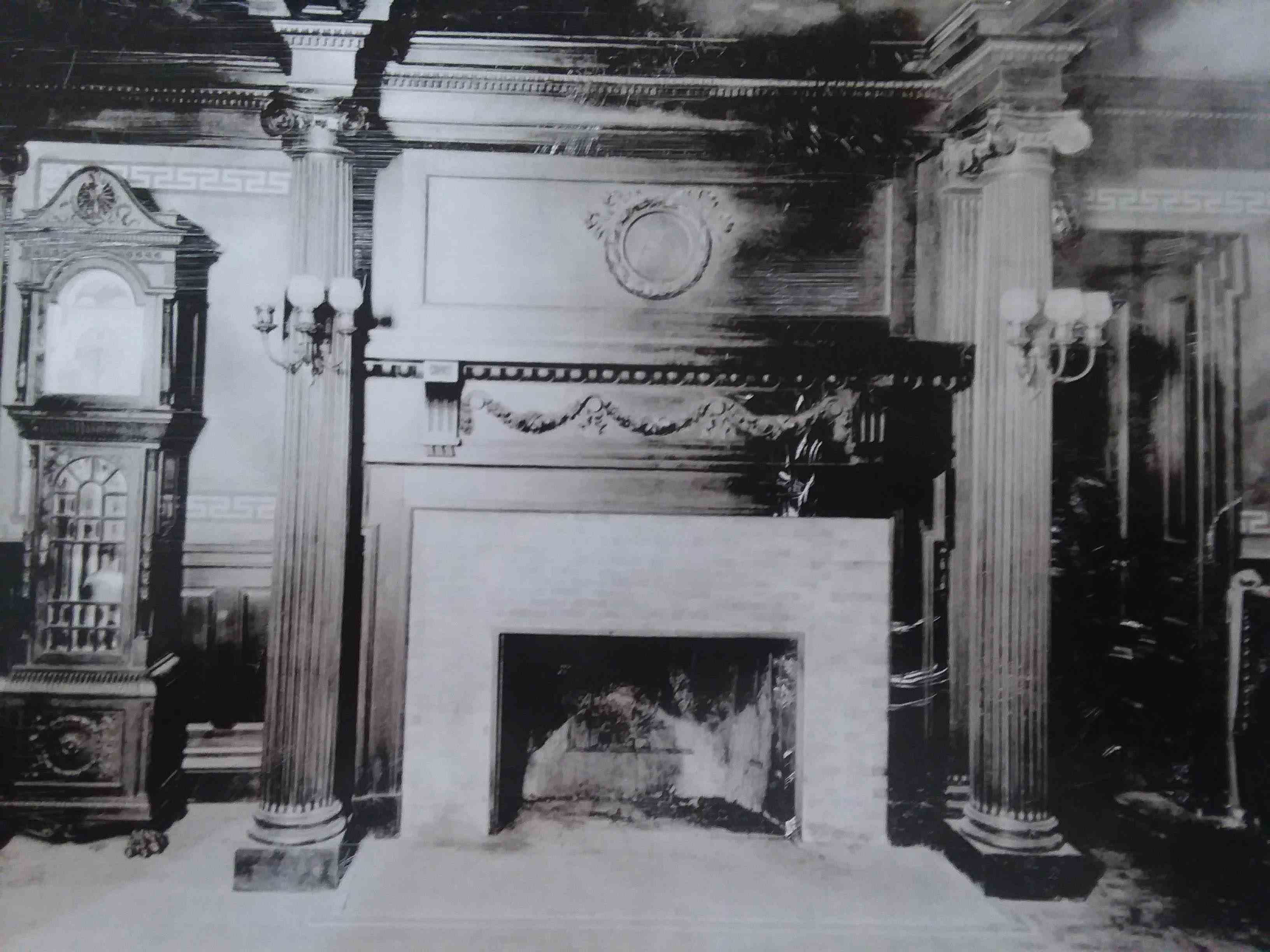 Architect Eberhard, who designed several large houses in the Larchmont and Ghent neighborhoods, designed the stone and slate L-shaped plan in the Scottish Baronial style that was popular at the turn of the century. The style, so the story goes, grew out of Henry Ford’s desire to build a modern house that looked like a Scottish castle. Around 1880, he hired an architect to design his modern Scottish castle and ended up with what was essentially a Victorian house with a turret on either end. Greystone mirrored this style. At the time, E.G. Potter and Co. of New York handled the interior decoration at a reported cost of $12,000. There were notable features: a grand staircase, handmade tiles on fireplace surrounds and extensive raised paneled wainscoting (Brazilian mahogany). 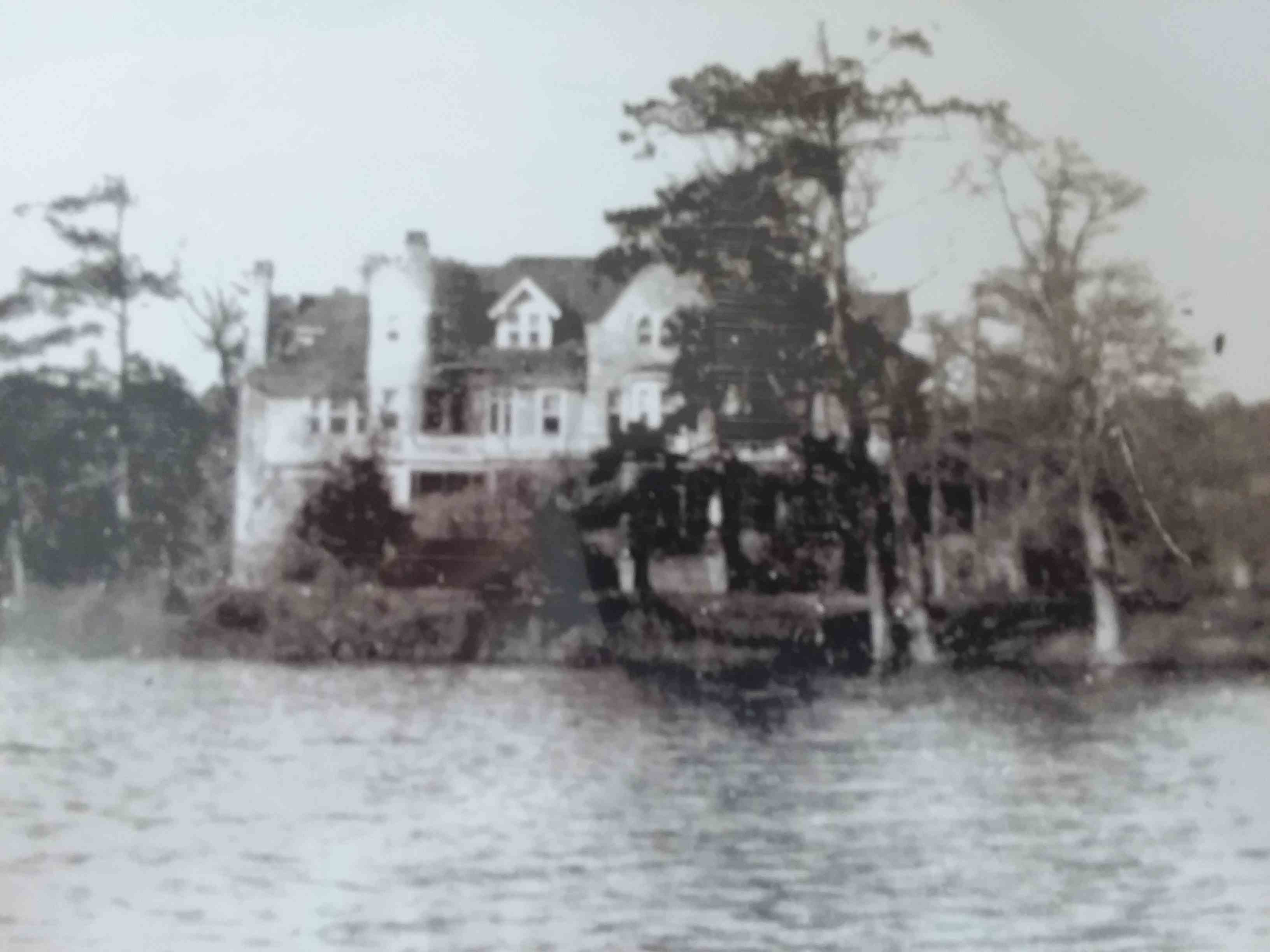 Upon its completion, Greystone—as it would later be called—must have been breathtaking. The curious would drive miles for a glimpse, for the Masurys and Eberhard had built not just a house, but rather a self-sufficient estate complete with its own Edison power plant, a windmill to pump water to the house, a water heater capable of handling 1,000 gallons, fruit orchards, vegetable gardens and stables. A lighted and covered boardwalk ran a half a mile or more from the oceanfront to Crystal Lake. The cellar had a full laundry and a huge ice-making system that operated off brine, so ice could be made year-round. Masury built an organ into the third floor. From behind a glass window, an organist hired for parties played music that was piped throughout the house via air registers to all the rooms.

The Masury’s raised three children at Lakeside or the Masury Mansion, as the estate was called during this period. Francis and Arthur were from Martha’s first marriage and were adopted by John. They later had another daughter together, Alice. In 1915 during World War I, Masury volunteered for the Navy and was commissioned as a Lt. Commander. He sailed cargo and merchant ships through 1918 taking equipment and ammunition to England and France without incident. 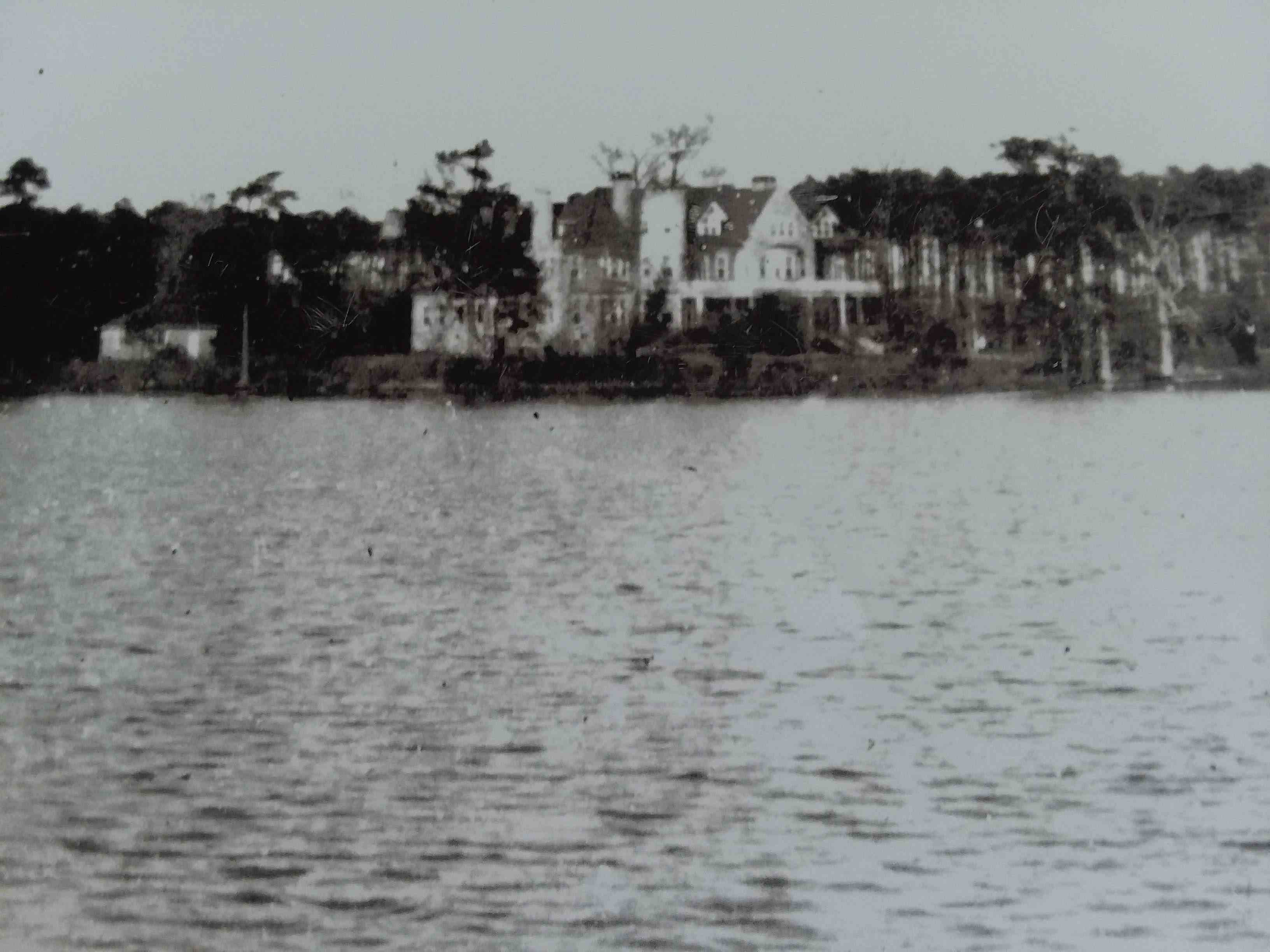 When he went off to war, he turned over the property to his wife, who managed a successful real estate business until her death in 1941. During the 1920s, Martha had 140 acres subdivided and roads built. At the time 52nd Street was referred to as Masury Lane and the Norfolk and Southern train station at 52nd Atlantic was called Masury Station.

Upon his return in 1919, Masury was a man at the top of his game…a Master Mariner, a commissioned officer in the U.S. Navy, and a guest of the White House and the administration. With a 150-acre estate in Virginia Beach and a personal ship he could sail to Europe or his other haunt, Rio in Brazil, he and his family enjoyed a wonderful life. He rented rail cars from the Norfolk and Southern railroad and sent them to Washington to pick up friends and cronies and bring them to Virginia Beach for long weekends.

In the early 1930s, Masury moved to San Diego, where he lived until his death in 1938. It was reported that he ran off with a 19-year-old niece. In 1935, the Masury Corporation leased the house to a group of North Carolina businessmen who turned the estate into a dining and entertainment nightclub known as the Crystal Club. The Crystal Club enjoyed a measure of prominence and is still remembered by locals. Offering liquor and gambling, it drew many of the era’s prominent jazz bands. At the time, gambling was legal by Virginia state law but illegal by federal law. Rumors were that the Virginia Beach police at the time made sure that all the casinos knew ahead of time before the feds showed up. One local story is that most of the club’s patrons came across the lake by boat so that, when the lookouts stationed at the land entrance saw the police approaching and a warning was given to the guests, they could head back across the lake to their parked cars. The club flourished through 1939 and was one more step in the development of Virginia Beach from a sedate oceanfront day resort in Princess Anne County, to a booming city that has grown to attract vacationers from as far away as Canada.

After the demise of the Crystal Club, the house was purchased by William Wilder in 1943. Wilder ran a group of movie theatres in Norfolk and Virginia Beach, and it is believed that he built the yellow brick retaining wall, garden wall and doghouse. The Greystone name dates from this period. The Wilder family lived on the property until 1967, when it was purchased by Andrea Hodgson. It had been vacant for several years following the death of Mr. Wilder.

Hodgson subdivided the remaining acres, and sold the Greystone (now on one acre) to C. William Emanuelson, a contractor who refurbished and built houses as well as bulkheads in the area. He repaired all the damage, brought the electrical system up to the 1960’s code and reworked a lot of the plumbing.